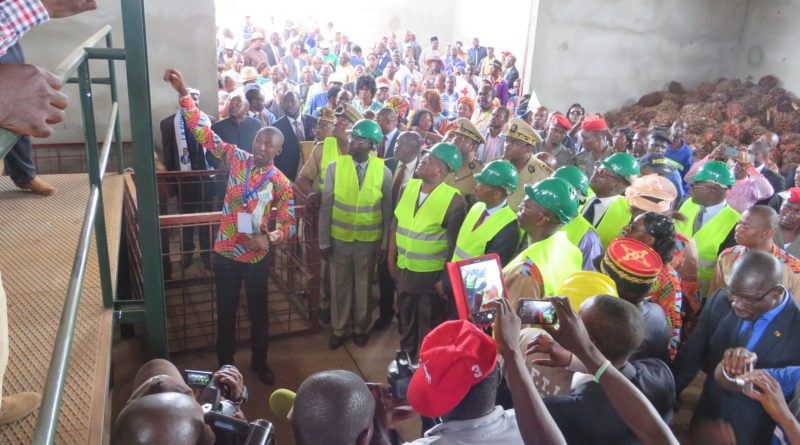 The spotlight was on March 30, on Abong-Mbang, Oboul 1 where the cooperative «The Agropastoral varieties” of Abong-Mbang abbreviated COOP-CA / COVAGRO, inaugurated its first oil processing unit palm in the main locality.
The official inauguration ceremony was co-chaired by the Minister of Mines, Industry and Technological Development (MINMIDT), and the Minister of Agriculture and Rural Development (MINADER), accompanied by the Minister of Public Service and Administrative Reform (MINFOPRA). The presence of administrative and traditional authorities as well as local and surrounding populations was noticed.

The COVAGRO Cooperative, set up since 13 October 2016, is the initiative of a group of young farmers involved in agropastoral activities, including cocoa farming, oil palm cultivation, plantain, and to a lesser extent poultry farming. This project for the creation of a modern oil mill is part of their activities, Abong-Mbang being an oil palm production basin in the Eastern Region.

The COVAGRO modern oil mill which was inaugurated on that day, is installed in a building built on an area of ​​approximately 1000 m2 and has the following equipment’s, designed and produced locally:

Ø Three storage bins with a capacity of 60m3;

All of this equipment is powered by a 66KVA generator.

The realization of this ambitious project would have been difficult with the only means of this young Cooperative. Indeed, the latter have sought and obtained support from various public and private partners, such as the Ministry of the Economy, Planning and Regional Development and the Ministry of Agriculture and Rural Development among others.

It should be pointed out that MINEPAT has granted an investment subsidy of Forty-Five Million (45,000,000) CFA Francs for the realization of this important infrastructure. The MINADER, meanwhile, donated a 60 CV tractor with its accessories, thus contributing significantly to the boosting of the palm nut processing unit. It is indeed this tool that makes it possible to transport large quantities of palm nuts from the plantations to the processing unit.

As for financial institutions, the MC2 Microfinance Institution through its Abong-Mbang agency is also one of the privileged partners, within the framework of certain facilities granted to the Cooperative and access to credit.

It is also worth mentioning the ongoing partnership with the Agricultural Values ​​Chain Development Project (AVC_DP) to make COVAGRO a pole for the development of palm oil cultivation in the “Region of the Rising Sun”. Moreover, the PD_CVA was present at this ceremony, represented by its National Coordinator and supported by the East Regional Team.

The members of Government expressed their satisfaction and their pride for this initiative carried by young Cameroonians who have chosen this locality to settle there, without necessarily having origins from the latter, is a pledge of a harmonious living together.

The Minister of Agriculture and Rural Development H.E Gabriel MBAIROBE encouraged them in their initiative which is in line with the guidelines of the Head of State in the implementation of 2nd generation agriculture. He finally invited all the young people of the East Region, to show boldness, courage and creativity following the example of the team of COVAGRO.